Despite a higher price tag initially, electric vehicles (EVs) tend to offer significant savings over time. The environmental benefits aside, which are noteworthy, EVs typically cost half as much to maintain and repair as gas-powered vehicles — and they’re growing in popularity.

Unlike conventional vehicles, EVs don’t have internal combustion (IC) engines. Instead of gasoline, they run solely on battery power. For some drivers, the concern was this meant a lack of decent torque. However, that’s no longer the case, and many electric vehicles feature similar power and torque as the average IC engine.

What’s more, the battery life is gaining some longevity. Most are expected to last for five to eight years. The battery is the heart of EVs.

Batteries
Battery technology for electric vehicles has developed from early lead-acid batteries used in the late 19th century, until about 2010s, to lithium-ion batteries. Lithium batteries (Li-on), the same technology that powers our smartphones and tablets, are found in most EVs today.

Li-on batteries have been revolutionary since their inception in the early ’90s, offering high levels of charge compared to other technologies. They’re also lightweight, temperature-tolerant, fast-charging, and offer a decent shelf life and lifespan.

In terms of EVs, six Li-ion battery technologies are popular with manufacturers. Let’s explore all these battery chemistries.

Why Li-ion batteries?
Li-ion batteries offer a high energy density that enables them to store a large amount of energy in a small space, making them the most popular choice for most electric vehicles. These batteries also provide a high power-to-weight ratio, meaning the batteries are lighter and typically more efficient than other types.

A lithium-ion battery pack is made up of several Li-on cells. The cells are arranged in a series and parallel to the desired voltage and current capacity. For example, if a 12.8V 125 AH battery pack comprises 3.2V 25 AH Li-ion cells, 4S5P is the required configuration. This means five cells are connected in parallel for an output of 125 AH in each master pack, and four master packs connect in the series for 12.8V.

In an electric car, hundreds of Li-ion cells are used to construct the battery pack. In the Tesla Model S 444 Panasonic, NCR18650B cells are connected in a 6S74P configuration.

The Li-on cell is the building block of a battery pack. These cells come in cylindrical, prismatic and pouch form factors used to construct EV battery packs by Tesla and Panasonic. Most other manufacturers use pouch or flat cells. Prismatic cells are also used, but by few manufacturers. The main components in a Lithium-ion cell are the cathode, anode, electrolyte, and separator.

• The cathode is the workhorse of a Li-on battery and the active material of a Lithium metal oxide. Lithium is highly reactive, so it’s mixed with oxygen and metal for stability. The metal used determines the voltage output of the battery. The current capacity of the battery is determined by the size of the cathode. A battery with a bigger cathode has higher charge storage. Li-on batteries are named after the Lithium metal oxide used as the cathode.

Typically, graphite-coated copper foils are used as anodes in Li-on batteries because graphite matches the voltage. Typically, amorphous carbon, synthetic graphite, and natural graphite are used as carbon-based anode materials. Sometimes manufacturers add silicon to carbon to increase the battery’s energy density. Another material sometimes used is Lithium Titanium Oxide, which is known for its durability and thermal stability.

• The electrolyte is an electrically neutral solution in which both electrodes are submerged. Though electrolyte is not reactive, it acts as a catalyst that makes the battery conductive when charging or discharging. It facilitates the movement of ions in both processes.

The separator also acts as a fuse for the battery. But it can get clogged due to melting on overheating. If this happens, it stops the flow of current between the cathode and anode before the battery catches fire. Li-ion batteries use Polyolefin as a separator. In large batteries, a tri-layered separator is used. 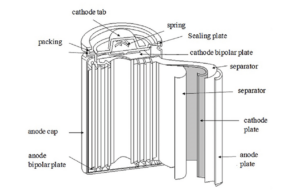 Types of Li-ion batteries
Li-ion batteries are classified by their cathode and use a graphite anode. The only exception is Lithium Titanate (LTO). The use or consideration of different cathode materials represents an effort to maximize energy density. For instance, researchers are currently evaluating the use of Lithium metal as an anode material and replacing the use of Lithium salt as an electrolyte with a solid-state electrolyte.

But for now, Li-ion batteries differ only by the cathode material and use the same anode and electrolyte materials. Here are the six primary Lithium-ion battery chemistries used in the EV industry.

Lithium Cobalt Oxide or LCO-based batteries were the first Li-on batteries in commercial production. Invented in 1991, the CO-based Li-on batteries quickly gained popularity in consumer electronics because of their high energy density (150~200 Wh/Kg). However, the disadvantage of these batteries is that they have low thermal stability and are prone to overheating. This means they do carry a risk of fire in high temperatures or if overcharged.

Lithium Manganese Oxide or LMO-based batteries were first launched in the mid-90s as an alternative to LCOs, offering a lower internal resistance. LMO-based Li-on batteries were important because they offered greater thermal stability and less risk of overheating. What more: they delivered higher currents, ranging from 20 to 30 Amperes. Higher current levels also meant faster charging and discharging.

These batteries quickly became the top choice for power tools, power banks, and eventually EVs. The C-rate for LMOs is 2/5 compared to 2/3 for LCO batteries. This means that if an LMO-based battery takes two hours to fully charge, it will take five hours to discharge. But there is one drawback they have in common with LCO-based batteries and that’s the poor cycle life (of 500~700). So, neither option is ideal for long-term applications.

Lithium Iron Phosphate or LFP-based batteries debuted as a means to solve the low cycle-life of the LCO and LMO-based options. Chemists were determined to find a better solution, and they found one in 1996. LFPs offer a lower energy density (90~160 Wh/Kg) but a cycle-life of 4000. The C-rates could be 2/5, the same as the LMO-based batteries — or higher and 2/30. LFP-based batteries have high thermal stability and can easily withstand mechanical disturbances. The only drawback is their nominal voltage is limited to 3.2V. But because of their high cycle life, low cost, reliability, and thermal stability, LFPs were quickly adopted as the Li-on batteries of choice by the automotive industry. They’re still used in e-rickshaws, electric bikes, and several power tools.

Lithium Nickel Cobalt Manganese Oxide or NCM-based batteries comprise 60% Nickel, 20% Cobalt, and 20% Manganese as the active materials in the cathode. This battery chemistry was invented in 2001, offering one of the highest energy densities available for Li-ons (150~220 Wh/Kg). These batteries provide good thermal stability, a high nominal voltage (3.7V), and a decent cycle life (2000 with a C-rate of 1/3).

Also, the energy density and power delivery of these batteries can be adjusted by altering the ratio of Nickel, Cobalt, and Manganese in the active allow material. NCM-based Li-ons quickly became the preferred choice for electric cars, and they’re widely used in medical equipment and power tools.

Lithium Titanate or LTO-based batteries made their debut in 2012, presented by YABO Power Technology. Based on nanotechnology, LTOs have a Lithium Titanate anode instead of graphite. Lithium Titanate offers a higher surface area, enabling a high charging and discharging rate. The C rate of these batteries is 10/30, so once fully charged, the battery can last up to 30 hours. LTO-based batteries offer the highest cycle life (30,000) of all Li-on batteries. Their downside includes low energy density (50~80 Wh/Kg) and a low nominal voltage (2.4V). Despite the facts, several automotive manufacturers have considered LTOs because of their high cycle life and slow discharge rate. These batteries are already used in to store renewable energy.

LTO-based batteries are widely used to store renewable energy. However, due to a charging time of up to 10 hours, high cost, and low energy density and nominal voltage, their application in EVs is questionable. The LCO-based battery chemistry is quite outdated. Even LMOs have only a 1% use in the automotive industry.

NCAs offer the highest energy density, but due to a low cycle life of 1000, they’re not widely used in electric vehicles. LFPs represent nearly a one-quarter share of use in the EV industry because of their high cycle life of 4000 and a C-rate of 2/30. This means that an EV with an LFP-based Li-on battery that’s only charged for two hours can run for about 30 hours. With a cycle life of 4000, even if EV is charged daily, the battery can be guaranteed for at least five to eight years.

Currently, NCMs are the most used Li-on batteries in electric vehicles, with 60% of the market share. These batteries have half the cycle life of LFPs but nearly double the energy density of 220 Wh/Kg (compared to just 120 Wh/Kg). The higher energy density supports a higher power-to-weight ratio in EVs. Plus, the C-rate of NCMs is 1/3. NCM’s battery chemistry also features high thermal and mechanical stability, so they make sense as the top choice for EVs in the current marketplace.