MediaTek has announced the Dimensity 9000+, an enhancement to the company’s top-of-the-line 5G smartphone chipset. This new high-end offering delivers a boost in performance over the Dimensity 9000 to make the next generation of flagship smartphones even more powerful and efficient. 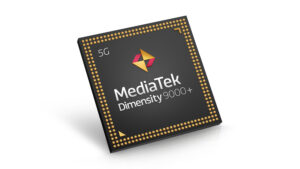 The new Dimensity 9000+ system-on-chip (SoC) integrates Arm’s v9 CPU architecture with a 4nm octa-core process, combining one ultra-Cortex-X2 core operating at up to 3.2GHz (compared to 3.05GHz with the Dimensity 9000) with three super Cortex-A710 cores and four efficiency Cortex-A510 cores. The advanced CPU architecture and Arm Mali-G710 MC10 graphics processor built into the new chipset provide more than a 5% boost in CPU performance and more than 10% improvement in GPU performance.

“Building on the success of our first flagship 5G chipset, the Dimensity 9000+ ensures that device makers always have access to the most advanced high-performance features and the latest mobile technologies, making it possible for their top-tier smartphones to stand out,” said Dr. Yenchi Lee, deputy GM of MediaTek’s Wireless Communications Business Unit. “With a suite of top-tier AI, gaming, multimedia, imaging and connectivity features, the Dimensity 9000+ delivers faster gameplay, seamless streaming and an all-around better user experience.”

The Dimensity 9000+ is the latest addition to the Dimensity 9000 series of flagship smartphone chipsets, which are designed for the growing bandwidth demands of the mobile market. The integrated LPDDR5X supports 8MB L3 CPU cache and 6MB of system cache. Additionally, the chipset integrates MediaTek’s fifth generation Application Processor Unit (APU 5.0) for powerful AI computing capabilities in a power-efficient design.

Key features of the MediaTek Dimensity 9000+ include:

Smartphones powered by the MediaTek Dimensity 9000+ are expected to be released in Q3 2022.