UART class
UART class is a part of the machine module. It implements standard UART/USART protocol. UART requires two lines – Rx and Tx for full-duplex communication. The Rx and Tx of one microcontroller is connected to the Tx and Rx of the other, respectively. This class is imported in a MicroPython script using the following statements.
from machine import UART

The instantiation of a UART object must follow this. The constructor function for the UART object is as follows.
class machine.UART(id, …)

The constructor method essentially requires specifying the UART ID as an argument. Many other arguments can be passed within the constructor method. These arguments are the same as defined for the UART.init() method. We will discuss them shortly. Some of the valid examples of instantiating a UART object are the following.
uart = UART(0)
uart = UART(0, baudrate=9600)
uart1 = UART(1, baudrate=9600, tx=33, rx=32)

The other methods available in the UART class are the following.
UART.init(): This method is used to initialize the UART object. It has the following prototype.
UART.init(baudrate=9600, bits=8, parity=None, stop=1, *, …)

Clearly, MicroPython allows fine control of UART communication. This is evident from the number of configuration parameters allowed in the UART.init() method.
UART.deinit(): On calling this method, the UART bus is disabled.

UART.readline():  This method reads a line of characters. A newline character terminates a line. It may return none if a timeout is met.

UART.write(buf): This method writes specified characters to the transmission line.

UART.sendbreak(): This method sends a break condition on the bus. It drives the lines low for a longer duration.

UART.irq(trigger, priority=1, handler=None, wake=machine.IDLE): This method invokes a callback (function) when data is received on the UART. It accepts four parameters. The trigger can be only UART.RX_ANY. The priority sets the priority level that can be between 1~7. A higher number indicates higher priority. The handler is the callback function. It is optional. The wake can be the only machine.IDLE. 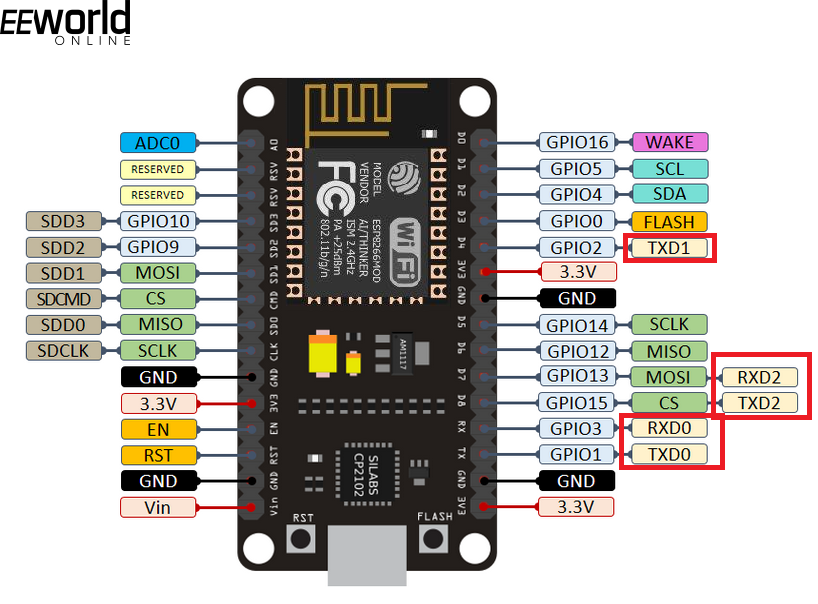 The GPIO8 is internally connected to the flash chip; only the UART1 is the transmitter. The UART0 is by default attached to Web REPL. Using the UART0 for serial data communication must be first detached from REPL. UART0 can be detached from REPL using the following code snippet.
import os
os.dupterm(None, 1)

Once the requirement of serial communication is finished, the UART0 must be reattached to the REPL. The UART0 can be reattached to REPL using the following code snippet.
import os, machine
uart = machine.UART(0, 115200)
os.dupterm(uart, 1)

UART in ESP32
There are three UART peripherals in ESP32 – UART0, UART1, and UART2. Each UART is attached to default pins as listed in the table below.

Like, in ESP32-DevKit-V1, only UART0 and UART2 are exposed. Depending upon the ESP32 variant, some of these pins may be shared or reserved for flash, PSRAM, or other peripherals. This is shown in the image below.

MicroPython allows multiplexing any GPIO with the hardware UARTs of ESP32. Therefore, irrespective of which default pins are exposed or not, all three UARTs can be used in a MicroPython script. While instantiating a UART object for ESP32, the Rx and Tx pins should also be passed as arguments.

Using UART in ESP8266 and ESP32
ESP8266 and ESP32 are primarily used in Wi-Fi-backed networked applications. In many of these applications, the master microcontroller managing embedded functions is another microcontroller, while ESP8266 or ESP32 plays a secondary role in handling only communication and control over the network. In such applications, UART is the only choice for data communication between ESP8266/ESP32 and the main controller of the device. Some sensors and modules may also provide a UART interface along with I2C or SPI for communicating sensor data or control signals, here again, UART in ESP8266/ESP32 can be utilized.