In the previous tutorial, sound waves and their properties were discussed. Now, let’s learn about acoustic waves.

Generally, the term “acoustic wave” is used in reference to a sound or vibration of any frequency. This makes sense because in physics, acoustics is the study of any mechanical wave in the solid, liquid, or gaseous medium. These are longitudinal waves, which move in the same direction of vibration as their direction of travel. The source of these waves is the vibration produced in any medium or sound source.

Since sound waves are also generated by the vibration from a medium, it follows that acoustic waves are a type of sound waves that travel on a surface, liquid, or in a gaseous medium.

Here are a few depictions…

Acoustic waves in the air

Acoustic waves in the water 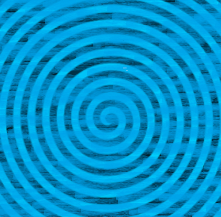 Acoustic waves on the surface

By studying sound as an acoustic wave, we can better understand its mechanical properties.

Acoustic waves are characterized by the following physical properties…

Let’s review each one…

1. Acoustic or sound pressure
The pressure that’s generated by any surrounding sound waves. Sound pressure is the deviation in the equilibrium atmospheric pressure due to a sound wave and it’s measured in pascal (Pa) or N/m2.

When a sound wave travels through a medium, it creates a disturbance in that medium’s pressure — increasing its total pressure.

This is expressed by an equation:

The increase of pressure can be measured by using a microphone in an air medium or a hydrophone in the water.

However, the particle velocity is not the same for the liquid and the sound wave. A sound wave travels much faster than a particle in this medium.

The particle velocity can be calculated using this equation:

3. Acoustic or sound intensity
Together, the sound pressure and the particle velocity make up the sound intensity. It’s defined as the power transfer per unit area. This area is always perpendicular to the energy that’s transferred.

Therefore, the sound intensity is the power that’s transferred by a sound wave per unit area, and it’s measured in watt per square meter or W/m2.

The sound intensity can be calculated as follows:

When a sound wave travels through the air, the particles in the air experience displacement, depending on the particle velocity. Displacement can either occur in the direction of the sound wave or opposite to it.

Particle displacement is calculated by this equation:

In the next tutorial, we’ll take a look at microphones, including how they work and how they’re classified.