An audio system has several functions and, typically, can:

The audio circuits are what perform the signal processing for the sound in the form of electrical signals. These circuits can also manipulate the electrical (audio) signals, such as through filtering, mixing, amplifying, or reproducing sound from the signals. Such processes are performed by different circuits or devices.

In this series, we’ll design three audio circuits as follows:

The audio crossover and equalizer are two different types of audio filters, which are one of the basic building blocks of an audio system.

Before discussing the building blocks of an audio system, it’s important to understand the physics behind the sound. After all, the circuits designed for this project technically manipulate electrical signals to represent the audio.

Sound as waves
A sound is a form of energy, much like heat, light, and electricity are forms of energy. Sounds are produced, propagated, and detected as vibrations. As such, it follows that for the production of sound waves, a source is required to produce the vibration. Once produced, a vibration will disrupt any particles that are present in the surrounding environment — and these particles further disrupt any others that are nearby.

It might be easier to visualize these vibrations as a wave. An analog wave is produced by the compression and rarefaction of the particles. Technically, it’s this compression and rarefaction that creates a pressure wave, which is the sound. In other words, a sound is a pressure wave that’s characterized by the properties of a waveform-like amplitude, frequency, and time period.

Sound as a pressure wave 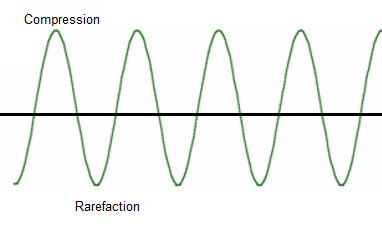 A sense of hearing is the ability to detect and recognize sound waves. The perception of sound by humans and animals is determined by the range of frequencies to which they’re attuned to. Every living creature has a different sound perception. For example, humans can hear sound frequencies in the range of 20 Hz to 20 kHz.

The sound pressure level is generally expressed in Db and is calculated as follows:

The reception of sound waves by human ears

Characteristics of a sound wave
A sound wave has three basic properties:

1. Pitch
The pitch is the individual perception of sound, which cannot be measured by any mathematical equation. Rather, it’s determined by how fast a sound wave is causing air particles to vibrate. It’s expressed as the frequency of a sound wave and represented by the compression and rarefaction of air particles. So, the frequency of a pressure wave physically represents how fast the compression and rarefaction of these particles are happening.

Although a pitch is typically described by the frequency of a specific sound wave, it’s not directly related to the frequency. The frequency is simply the physical property of the audio vibration that’s used to figure out the pitch of a sound.

The frequency of a wave can be determined by this equation:

This means the frequency of the sound wave indirectly expresses its pitch. Frequency is the number of waves in a given time period. The period can be one second, a minute, or an hour.

The standard (ISI) unit of frequency is Hertz (Hz). The Hertz is defined as the number of cycles per second. If there are 50 cycles in one second, for example, the frequency is 50 Hz.

As human can hear sounds from 20 Hz to 20 kHz, this frequency spectrum is divided into different frequency bands:

The sound frequency of a pitch

The amplitude of a sound wave is set by the vibration of the source. The source transfers the energy to a medium through vibration. A greater energetic vibration generates a larger amplitude.

Loudness represented by the amplitude of a sound wave 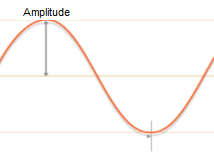 For humans, the loudness of a sound also depends on the sensitivity of their ears. As humans are sensitive to certain frequencies, loudness depends on the sound wave amplitude and the frequency within a perceived audio perception range.

The energy of a sound wave is proportional to the square of the amplitude. So, the greater the amplitude, the louder the sound and the more energy it carries.

Depiction of loudness based on the amplitudes of sound waves 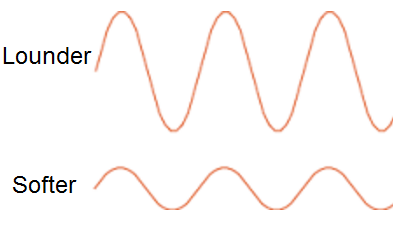 Therefore, the amplitude or energy of the harmonics frequencies — such as 2fo, 3fo, 4fo, etc. — compared to the energy of the fundamental frequency, determines the quality of the sound wave.

In the next tutorial, we cover acoustic waves, which are a type of sound wave.