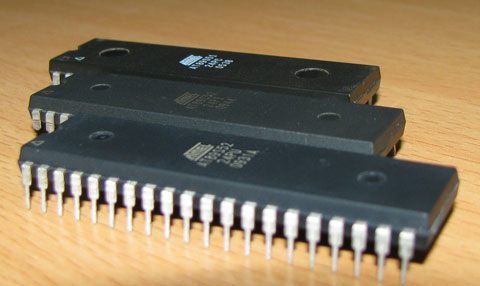 Intel fabricated the original 8051 which is known as MCS-51. The other two members of the 8051 family are:
i.     8052 – This microcontroller has 256 bytes of RAM and 3 timers. In addition to the standard features of 8051, this microcontroller has an added 128 bytes of RAM and timer. It has 8K bytes of on chip program ROM. The programs written for projects using 8051 microcontroller can be used to run on the projects using 8052 microcontroller as 8051 is a subset of 8052.
ii.    8031 – This microcontroller has all the features of 8051 except for it to be ROM-less.  An external ROM that can be as large as 64 K bytes should be programmed and added to this chip for execution. The disadvantage of adding external ROM is that 2 ports (out of the 4 ports) are used. Hence, only 2 ports are left for I/O operations which can also be added externally if required for execution.
Comparison of 8051 family members:
Fig. 2: Comparison of 8051 family members
Various 8051 microcontrollers
8051 microcontrollers use two different kinds of memory such as UV- EPROM, Flash and NV-RAM. Hence 8051 will not be seen in the part number even though it is the most popular member of the 8051 family.
i.            8751 – This microcontroller is the UV-EPROM version of 8051. This chip has only 4K bytes of UV-EPROM. It is required to have access to the PROM burner and the UV-EPROM eraser to erase the contents inside the chip before it is programmed again. The disadvantage of using this memory is the waiting time of around 20 minutes to erase the contents in order to program it again. Due to this limitation, manufacturers fabricated flash and NV-RAM versions of 8051.
ii.            AT89C51 from Atmel Corporation – Atmel fabricated the flash ROM version of 8051 which is popularly known as AT89C51 (‘C’ in the part number indicates CMOS). The flash memory can erase the contents within seconds which is best for fast growth. Therefore, 8751 is replaced by AT89C51 to eradicate the waiting time required to erase the contents and hence expedite the development time. To build up a microcontroller based system using AT89C51, it is essential to have ROM burner that supports flash memory. Note that in Flash memory, entire contents must be erased to program it again. The contents are erased by the ROM burner. Atmel is working on a newer version of AT89C51 that can be programmed using the serial COM port of IBM PC in order to get rid of the ROM burner.
Fig. 3: Versions of 8951 from Atmel (All ROM Flash)
There are different versions of packaging and various speed of the products mentioned in the above table.
Fig. 4: Various Speeds of 8051 from Atmel
iii.   DS5000 from Dallas Semiconductor – Dallas Semiconductor fabricated the NV-RAM version of the 8051 which is known as DS5000. The PC serial port is utilized to load the program onto the in-built ROM. The advantage of NV-RAM memory is the facility to erase the contents one byte at a time.
v.
Fig. 5: Versions of 8051 from Dallas Semiconductor
The variety range of speed and packaging versions of DS5000 which is shown in the Table 1.5
Fig. 6: Versions of 8051 Dallas Semiconductor
iv.    One – Time – Programmable (OTP) versions of the 8051 – This version of microcontroller is cheaper and available from various manufacturers. The manufacturers use OTP microcontroller for mass production because the price per unit is very cheap.

Fig. 7: General Architecture Of A 8051 Microcontroller
Memory Architecture
The 4 discrete types of memory in 8051 are:
i.            Internal RAM – This memory is located from address 0 to 0xff.  The memory locations from 0x00 to 0x7F are accessed directly. The bytes from 0x20 to 0x2F are bit-addressable. Loading R0 and R1 the memory location from 0x80 to 0xFF can easily accessed.
ii.            Special Function Registers (SFR) – Located from address 0x80 to 0xFF of the memory location. The same instructions used for lower half of Internal RAM can be used to access SFR’s. The SFR’s are bit addressable too.
iii.            Program Memory – This is read only memory which is located at address 0. With the help of 16 bit Special Function Register DPTR, this memory can also save the tables of constants.
iv.            External Data Memory – Located at address 0. The Instruction MOVX (Move External) should be used to access the external data memory.

History of 8051 and Key Developments
Intel Corporation fabricated the 8 – bit microcontroller which was referred as MCS-51 in 1981. This microcontroller was also referred as “system on a chip” because it has 128 bytes of RAM, 4Kbytes of ROM, 2 Timers, 1 Serial port, and four ports on a single chip. The CPU can work for only 8bits of data at a time because 8051 is an 8-bit processor. In case the data is larger than 8 bits then it has to be broken into parts so that the CPU can process conveniently. Most manufacturers have put 4Kbytes of ROM even though the quantity of ROM can be exceeded up to 64 K bytes.
Intel permitted other manufacturers to fabricate different versions of 8051 but with the limitation that code compatibility should be maintained. This has added advantage that if the program is written then it can be used for any version of 8051 despite of manufacturer.
As years passed by, the quality of technology surpassed the expectation of the greatest minds, with gadgets becoming smaller, sleeker and more efficient. Microcontrollers were seen as the answer to the requirements raised in advanced electronics. This is the reason why manufacturers have now focused their production around the following main developmental aspects:
i.                    Ease-of-use
ii.                  Market availability
iii.                Less power usage
iv.                Smaller processing power
v.                  More integrated features like RF and USB
vi.                Smaller form factors

The 8051 has been in use in a wide number of devices, mainly because it is easy to integrate into a project or build a device around. The following are the main areas of focus:
i.             Energy Management:Efficient metering systems help in controlling energy usage in homes and industrial applications. These metering systems are made capable by incorporating microcontrollers.
ii.           Touch screens:A high number of microcontroller providers incorporate touch-sensing capabilities in their designs. Portable electronics such as cell phones, media players and gaming devices are examples of microcontroller-based touch screens.
iii.         Automobiles: The 8051 finds wide acceptance in providing automobile solutions. They are widely used in hybrid vehicles to manage engine variants. Additionally, functions such as cruise control and anti-brake system have been made more efficient with the use of microcontrollers.
iv.         Medical Devices:Portable medical devices such as blood pressure and glucose monitors use microcontrollers will to display data, thus providing higher reliability in providing medical results.
Programming environment and programmer
Formerly, programmers used machine language for coding. A machine language is a program that consists of 0s and 1s which was very dreary for the humans to

Fig. 8: Pin Diagram Of Atmel 8051 Microcontroller
program any computer. In due course of time, assembly language was developed in order to speed up the programming and make it error-free.  Assembly language is a low level language which uses an assembler to translate the program into machine code. The high level programming languages such as BASIC, Pascal, Forth, C, C++, and Java are available to code the program for 8051. These high level languages make use of a Compiler to translate into machine code. For example, when a program is written in C, the program needs to be translated into machine language using C compiler. Usually, Assembly and C language is widely used for 8051 programs as compared to the other high level languages.
The 8051 provides a total of four ports for I/O operations. 8051 has 40 pins, of which 32 pins are set aside for the four ports. PO, P1, P2, and P3 each have 8 pins and can be used for either input or output. The remaining pins are designated as Vrt, GND, XTAL1, XTAL2, RST, EA, ALE/PROG and PSEN.
8051 allows you to manipulate one or all of the bits of a port, thus providing programmers with a unique and powerful feature. 8051 provides the programmer with the ability to read, write and modify each port to customize applications as much as possible.
Filed Under: Articles
Tagged With: 8051, interrupt, microcontrollers, ram, rom