In the previous tutorial, VHDL Tutorial – 7, we learned how to build different gates (such as AND, OR, NOR, NOT, etc.) by using the NAND gate in VHDL — proving that the NAND gate is universal. 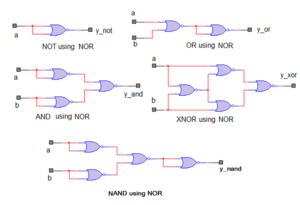 To summarize, we’ll write a VHDL program, compile and simulate it, and get the output in a waveform. We’ll also verify the output waveforms with the given truth table.

From the output waveform, it’s easy to see that the output of the different gate circuits (built using only the NOR gates) is the same as the output of a particular gate.

That means we can design all of the other gates by using only the NOR gate — meaning, the NOR gate is a universal gate.

In the next tutorial, we’ll design a digital circuit from a given Boolean equation in VHDL.